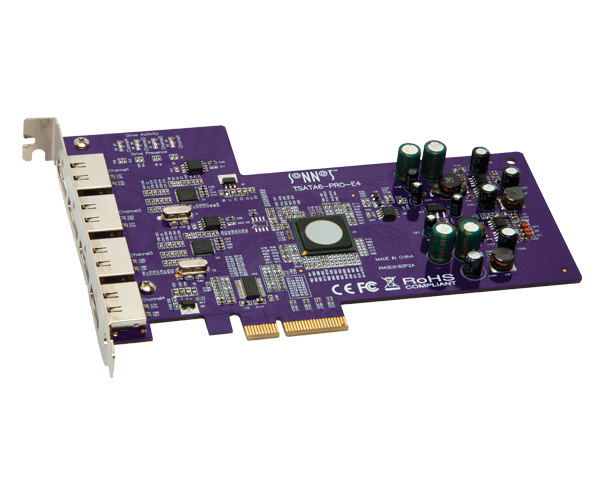 Why choose an eSATA card? External storage and professional SSD readers often have two or more interfaces from which to choose, including FireWire®, USB, and eSATA. Your computer has USB ports, may have FireWire ports, and maybe even a Thunderbolt™ port, too. So if you can just plug into your computer's existing ports, why consider an eSATA card? Performance and cost. Consider the facts that the 6 Gb/s eSATA interface offers superior throughput to that of all FireWire and USB interfaces, and Thunderbolt storage systems carry a price premium over eSATA storage systems. Sonnet's Tempo™ SATA Pro 6Gb 4-Port card is a cost-effective way to add four high-performance bootable eSATA ports to your computer so you can take advantage of this fast interface.

Sonnet's Tempo SATA Pro 6Gb 4-Port's fast, 6 Gb/s eSATA interface easily handles the increased bandwidth requirements of 6 Gb/s SSDs. Built around a second generation 6Gb SATA chipset, it offers greatly improved performance over older 6 Gb eSATA cards and is capable of transferring files from a single SSD at up to 500 MB/s. Even greater performance (up to 1,300 MB/s!) is possible when you connect four SSDs and format them as a RAID 0 set. Increased onboard cache enables this Sonnet controller to perform even better in the latest computers as well as in Sonnet's Thunderbolt expansion systems. Additionally, this PCIe computer card includes the following key features: